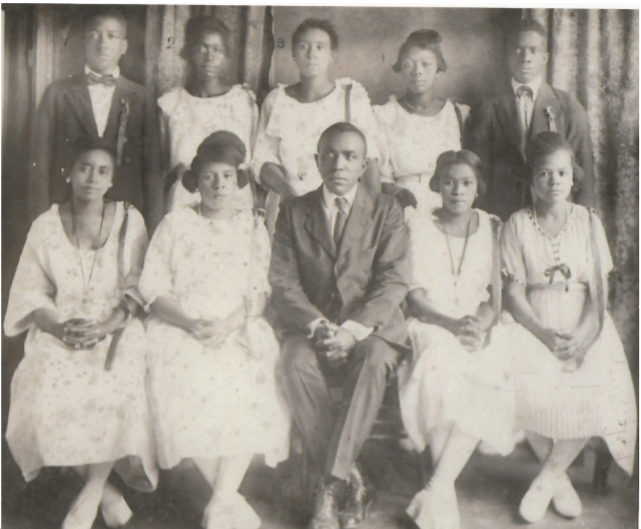 What Whitley School Was to The Hope Family? Everything!!
Whitley Annual Event – Remembering Isaiah Whitley
August 16, 2019
By: James Hope

Education – Formal education for children in the Africatown community began at Whitley. A few students, however, were able to get a head start at Our Mother of Mercy Catholic Church. I started at age 6 in the first grade and went through grade 5. My class was the first class that entered grade 6 at the high school, probably because of class size. The class of ’65 was the largest graduating class in school history.

Training – For my brothers and me, Whitley provided us with our first job. My father, Rev. Hope was the janitor of the school. When my father and mother came to Mobile from Marengo County, they opened a grocery store, and later, my father went to work at International Paper Co. He left IP and there were 2 versions of why: one was that he was called into the ministry and didn’t want to work Sundays. The other version, according to brother Julius, was that Rev. Hope left IP because he was beaten up trying to get workers to start a union. My version of why he left IP for Whitley was because he had an inhouse supply of workers, the school was skip across the street from the home house and he would be working in a school full of beautiful and classy women. Never mind he had a beautiful, classy lady at home.

At any rate, cleaning Whitley School gave me a work foundation that carried me through life. My brothers and I were assigned rooms that had to be cleaned every day. If we were involved in sports are other school activities after school, the rooms had to be cleaned the next morning along with opening the windows or turning on the heaters depending on the season. Whenever we had large jobs like mopping the floors of an entire building, we would engage neighbor kids. Brother Alvin had a group of core friends like Willie Powe and John Bacot who would always help.

The things I learned cleaning Whitley, like being responsible, taking ownership, being a team player, being dependable (work ethic) carried me through my college, military and my employment years with ATT.

Pride – Whitley was a source of pride for all of us who attended it. Except for our church, Whitley was the institution we loved and cherished, and it was ours. I was especially proud because my father had keys to all the buildings, and no one could get in unless my father let them. I remember growing up as a happy kid with a school campus that had 2 big white classroom buildings, a cafeteria/auditorium, a pump house with a large water tank inside where maintenance equipment was kept. My father would spend time there between tasks reading his bible and humming a song. Yes, I remember outdoor toilets which were no different than home except you had tissue instead of newspaper or a catalog. A structure was later built for an indoor facility which became the backstop for our speeding rubber ball game.

Role Models – Attending Whitley provided students with outstanding role models, didn’t matter that they were all women. Except for Rev. Hope, there was not a man in the whole school. Little did we know that we had the best and brightest in all Mobile, not to mention that they cared about us, had nice cars and they all were pretty. We didn’t realize until later in life how blessed we were to have teachers and administrators who, today, could have been doctors, lawyers, astronauts, scientists and leading persons in their field.

Community Engagement – Whitley faculty were not only role models at school, but they were also engaged and set good examples in the community. Many of the teachers were involved in civic and social activities and were regular worshipers at local churches. At Yorktown, it was common to see Mrs. Billingsley, Mrs. Georgia Taylor and Mrs. Genevieve Hubbard at church service.

Another role model was Rev. Hope who was Whitley’s PTA president, MCTS PTA president and later became Mobile County Wide PTA President. He was involved in civic matters, becoming president of the Non-Partisan Voters League after John LeFlore. Rev. Hope was a plaintiff in the supreme court case, Bolton versus the City of Mobile that challenged Mobile’s County Commission form of government as being unconstitutional. That case was the impetus for change to Mobile’s current Mayor- Council form of government.

Caring for Others – Whitley was a caring school with teachers going out of their way to help students in need. I was one of those students who received help. Mrs. Cathleen Bright had a son, Edward, who was the same age as me. Edward would wear his clothes for a while and then I would wear them. Mrs. Bright would also take me home with her during Mardi Gras. I loved it because she had indoor plumbing and all the rooms in her house were warm besides the kitchen. My other siblings benefited from the generosity of the teachers as well.

Social Awareness and Involvement- Whitley provided opportunities to mature socially and to get involved in activities that would ha a lasting impact on our lives. I remember, as a 5th grader, going to a semi-formal dance with a girl. I remember the disciplines of Saturday morning scout meetings. There was kite day and winning a prize with the ugliest kite, there was music hour in the cafeteria learning new songs like “Jesus loves the little children of the world”. I remember May Day with all its pageantry, beauty and fun. I remember my mother staying up all night before May day making chicken suits and other costumes and me helping her replace the bobbin, thread needles and serve as a mannequin.

I also remember used books shipped to Whitley from schools across town that my father helped distribute. And I remember shipments of used desks that my brothers and I cleaned before moving them to the classroom.

Campus for Play – With all the things I enjoyed about Whitley, the one thing I loved most was having an expansive playground across the street from our house. There was lots of green grass for all kinds of play and games. Early on, there was an assortment of trees: pecan, black walnut, cedar, fig, plum, black berry bushes and honey suckle vines. There were also china berry trees. The green china berries provided ammunition for our pop guns and when the berries turned yellow, provided food for birds, especially cedar waxwings.

Perks – Even though the work was hard, and the pay wasn’t much, being a janitor at Whitley did have its perks. Equipped with only a 3rd grade education, being in a school environment helped my father continue his education. From a weekly current events newsletter that I would pick up after cleaning a room, there was a crossword puzzle that I enjoy working and still do them to this day. There were the leftovers from the school day cafeteria meal that my father got to bring home.

After school closed for the Xmas holidays, we got to bring home the school’s Xmas tree. Sister Ann would perk up the tree with a coat of white shoe polish, and we would get another 2-3 weeks out of that tree. After nightly storms, my father would have us up early the next morning picking up pecans and bringing home firewood.

Relationships for Life – There is something special and unique about friendships that are started in childhood. Whitely afforded me the opportunity build relationship that have stood the test of time. The teachers also had a special bond amongst each other. The teachers continued to meet many years after the school closed. Rev. Hope was a regular attendee of those gatherings.
“Who gets remembered depends on who’s in the room doing the remembering”.