Ready and Able! (MCTS Students Commitment to Service and Enlightenment)

HomeReady and Able! (MCTS Students Commitment to Service and Enlightenment) 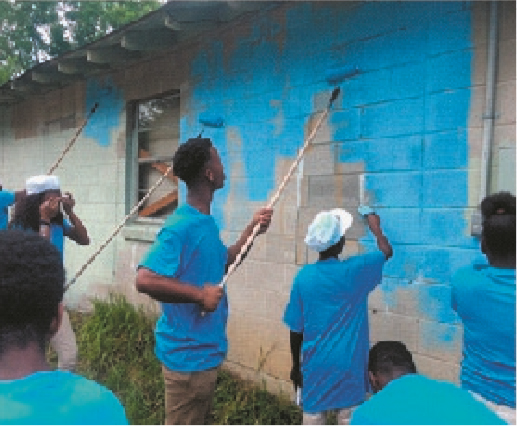 I was delighted the first time I set foot in The Den and saw how significant MCTS was as a central pillar in the establishment and progress of Africatown and the surrounding area. The historical relics gave testimony to the beacons of light the alumni became once they left the hallowed Halls of MCTS. When asking various alumni what the keys to success were; the most common replies I heard centered around the support each student was given and expectations the community had of nothing short of success.

Move forward 50 years and we see a slightly different paradigm. The school being more under the auspices of county administration is seen less a direct imprint of the surrounding community.

Two years ago, I took a special interest in doing some health and wellness projects with the special needs classroom at the school. Living in New York, I had purchased some property in Africatown the year previous eager to move ahead with some investment plans I had drawn up. After a couple closed doors, I realized I would have to put things on hold and regroup. Having previous experience working with urban youth, I saw the school as a perfect outlet to contribute to my new community. Speaking with the principal Mr. Stallworth, I was inspired by his mantra to, above all, produce students that make good citizens and contribute to their community.

The experience has been nothing short of amazing. I have run across so many students with amazing talents they never knew they had. So far we have established a school garden which has an ongoing focus on Afro-diasporic crops, pollinator plants, crops for health and nutrition, and tropical looking plants that are both decorative and edible. Another focus has been looking at community examples of the influence people of African descent have had on the built environment, especially involving the traditional architecture characteristic of the South. The goal is to preserve the narrative through hands-on revitalization projects.

This year the 2018 eighth grade class voluntarily painted a house; a project they had been eagerly anticipating for over a year. This year’s eighth graders have repeatedly approached me asking when they can paint a house to continue the service legacy of the class that preceded them.

My experience working with MCTS youth has provided me proof that we can’t forget about our youth. Our youth are a mere reflection of our own collective success or failure to envision a brighter future.